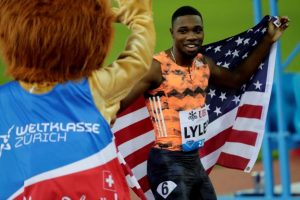 ZURICH, Switzerland: American Noah Lyles backed up all the talk as he turned on the after-burners to win the Diamond League 200 meters final impressively in Zurich on Thursday and scoop the $50,000 prize.

In the first of two finals nights, the biggest athletics event of this “fallow year”, Lyles started favourite having won all four previous Diamond League races over the distance this season.

As usual he had ground to make up after a less-than-blistering start but, also as usual, he had no trouble doing it as he catapulted off the bend to suddenly open a two-meter gap, which he maintained to the line, winning in 19.67 seconds.

Turkey’s world and European champion Ramil Guliyev was second in 19.98 – the fifth time he has finished behind Noah Lyles this season – while Jereem Richards of Trinidad and Tobago was third in 20.04.

Athletics has been crying out for characters to fill the void created by the retirement of Usain Bolt and the confident 21-year-old is certainly playing his part on and off the track.

“I came here to go for the win and I did it,” said Noah Lyles. “I was reasonable out of the blocks but I want to go better with my training.”

Murielle Ahoure, who started the season by winning the world indoor 60m title, ended it with victory in the 100m as she held on after a fast start to triumph in 11.01 seconds.

“I am so excited,” said Ahoure. “Before the African Championships I had to pull out, I was so disappointed to miss it. I was not sure about my shape then. I wanted to do one more race. I am so happy to come here and to win it.”

In probably the most predictable result of the night South Africa’s Caster Semenya took the 800m in one minute, 55.27 seconds having hit the bell 15 meters clear, to take the Diamond League title for the third successive season while American Dalilah Muhammad made it two in a row in the 400m hurdles in 53.88.

There was another successful defense in the men’s 1500m as Kenya’s Timothy Cheruiyot clocked a lively 3:30.27 as he got the best of a last-lap battle with compatriot Elijah Manangoi.

Another Kenyan, world and Olympic champion Conseslus Kipruto, won a brilliant men’s 3,000 steeplechase, overcoming the loss of a shoe on the second lap to overhaul Soufiane El Bakkali on the line, while American Fred Kerley won the men’s 400m in 44.80 after Steven Gardiner pulled up injured in the home straight.

Sifan Hassan’s hopes of a remarkable double disappeared as she was out-kicked by Kenya’s Hellen Obiri who produced a devastating last 300m to win the women’s 5,000m in 14:38.39.

Hassan of the Netherlands will hope to make amends over 1,500m in Brussels on Friday.

The highlight of the field events came in the shot put where New Zealand’s world champion Tom Walsh threw 22.60m to break the Diamond League record and the 30-year-old meeting record of 22.42 of American Randy Barnes.

Mariya Lasitskene rounded off an impressive season to successfully defend her high jump title with a leap of 1.97 meters.

The second part of the finals takes place in Brussels on Friday, with the men’s 100meters top of the bill and $50,000 prizes for all the event winners.