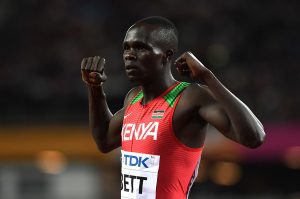 The 20 year old, who clinched a bronze medal in the 800 meters, held at the World Championships 2017 in London, has been suspended upon evading a doping test. The activity was brought to the surface by the Athletics Integrity Unit (AIU).

Kipyegon Bett is a Kenyan national and a professional runner, specializing in the 800 metres.

Kenyan marathon sprinter Samuel Kalalei and comrade Lucy Kabuu, are also on the rundown for those confronting hearings, after both were tested to be positive for a denied substance.

The AIU has said that it will remain transparent to the public, in each phase of their process of managing doping tests, as opposed to publishing details only when procedures are finished.

Kipyegon Bett is the latest Kenyan athlete to be charged with an anti-doping violation.
He had been provisionally suspended from competitions due to failure to submit a sample for testing. @JWokabi@MichKatamihttps://t.co/ugnSe8qVQC