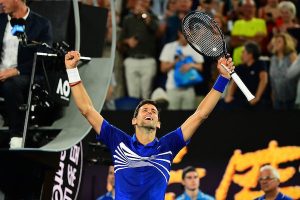 Novak Djokovic was about as immaculate as can be in his elimination round at Rod Laver Arena.

It was an execution so good, so awesome, that it was anything but difficult to feel as though just a single man on the planet may get an opportunity of keeping Djokovic from guaranteeing a record seventh Australian Open title: Rafael Nadal. The two men will face each other in Sunday’s final.

Djokovic won the semi-final in a dominating fashion with a 6-0, 6-2, 6-2 triumph that endured under 1½ hours. His opponent Lucas Pouille had no answer to the World No.1 tennis player who breezed past him in no time.

Presently Djokovic will face against his old adversary, Nadal, for the 53rd time on visit, eighth in a Grand Slam final.

It will be the 14 Grand Slam title winner and the current No. 1-positioned Djokovic against the Spaniard, Nadal who is the world No.2 and has won 17 Grand Slams so far.

25th of January: Picture of the day – in Tennis: Novak Djokovic cruises past Lucas Pouille in Australian Open’s second semi final. The Serbian won the match in three strong sets and seems to be unstoppable. pic.twitter.com/dA8zgCOzTq

There’s no place on the court he can’t cover.@DjokerNole finds the line on a brilliant forehand for the @cpaaustralia Shot of the Day.#AusOpen pic.twitter.com/qYtvlWcM9Q

“…definitely one of the best matches I ever had on this court”, Novak #Djokovic.#Djokovic was at his dominant best on Friday night, as the world No. 1 dismantled Lucas #Pouille to set up a mouth-watering #AusOpen final with Rafael #Nadal!