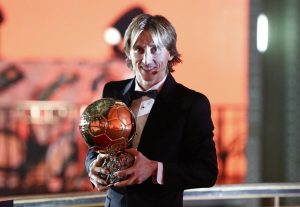 Congratulations to Luka Modric, if Ronaldo won it in the past 2 years then Modric deserves to win it this year. Messi has a different rating standard so won’t comment about him. #Modric

Luka Modric: “Cristiano & Messi..they are two phenomenal players. Many players Mbappe, Griezmann, Neymar…to win it it means I did something special on the pitch. That’s why 2018 is a dream year for me.”

Luka Modrić wins the Ballon D’or 2018. And so the 10 year duopoly ends. While I am fuming at the results for some, i’m glad that it ends 5-5 equally for Ronaldo-Messi. Fitting end to a spectacular era. #BallonDor

? He also breaks Messi and Ronaldo’s 10-year duopoly of the #BallonDor! pic.twitter.com/TTLXO4o7lQ

Don’t get me wrong I like Luka Modric but you going to tell me he’s better then Ronaldo or Messi? Does this mean every 4th year the team that does well in the World Cup directly influences voting so much that the 2 best players in the world don’t win it? Wow

To go on and win the #BalonDOr against Messi and Ronaldo with that start in life…unreal!! Inspirational pic.twitter.com/Wq9sAMGt1z

Luka Modric is good but no where near Messi and Ronaldo. The stats won’t prove me wrong either. Portugal were eliminated earlier than Croatia. Ronaldo is way ahead of Madric at Real Madrid on all stats. He made Madrid thick. FIFA want a change, but the best player did not win.

Football: Top Five Players Of This Season So Far