In the morning, at Iqbal Stadium Faisalabad, Balochistan opted to use the soil first after winning the toss and put Punjab into bat.

Punjab once again posted a huge total of 422 runs on the board for the loss of 6 wickets in allotted 40 overs. Riasat Khan played excellently for his unbeaten 124 runs off 88 balls and the Captain Nisar Ali scored rapid 106 runs off 54 balls with the help of 10(4’s). Badar Munir took 2 wickets for 72 runs while Zeeshan Abbasi claimed 1 wicket for 49 runs.

In reply, Balochistan who chased the toughest and historic total of 499 runs just a day before against the same side started cautiously as they had the self-belief to chase more than 400 runs easily.

Openers Badar Munir and Mohsin Khan accelerated in the middle overs and the opening stand of 400 runs made the chase easy for their team.

Badar Munir who have been in the superlative form, once again scored a double century and got out after scoring 224 runs off (126) balls with the help of 38 (4’s) and Mohsin Khan remained unbeaten on 151* runs off (89) balls, he hit 17 (4’s) in his outstanding innings.

Balochistan chased the target of 426 runs in 35.3 overs for the loss of 1 wicket. Mujeeb-ur-Rehman was the only successful bowler to claim a wicket.

Man of the Match:  Badar Munir

Man of the Series:

1. Riasat Khan in B1 Category
2. Badar Munir in B2 Category
3. Muhammad Rashid in B3 Category 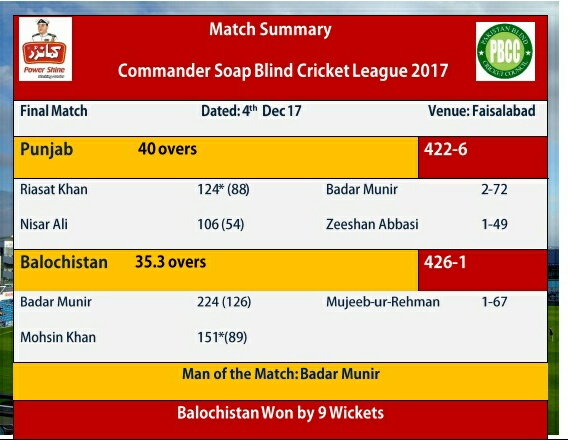