Gujranwala won the toss and decided to bowl first. Abbottabad openers, Matiullah and Kamran Akhtar toiled the Gujranwala bowling attack and piled up 282 runs for the first wicket partnership. Abbottabad posted massive total of 414 runs for the loss of 2 wickets in allotted 20 overs.

Kamran Akhtar smashed unbeaten 167* runs off 54 balls, he hit 11 sixes (6’s) in his innings, while Matiullah took the charge earlier and got out after scoring 159 runs off (56) balls, he smashed 7 sixes.

Gujranwala in reply tried hard to reach the target of 415 runs, Nisar Ali gave some resistance and got out after scoring 154 runs off 57 balls, he hit 33 (4’s) and 1 six. Muhammad Akram chipped in with 50 runs.

Abbottabad made 329 runs for the loss of 9 wickets in 20 overs. Kamran Akhtar took 2 wickets, Matiullah and Riasat Khan claimed 1 wicket each.

Man of the Match: Kamran Akhtar

4th Match of the Trophy:

Islamabad won the toss and put Attock into bat. Islamabad tightened the grip and checked the scores of Attock in fielding restriction overs. Badar Munir then devastated the remaining overs and remained unbeaten on 165* runs off 72 balls. He knocked out 7 sixes in his innings. Attock accumulated 262 runs for the loss of 3 wickets in 20 overs. Anees Javed took 1 wicket.

Pictures of the Day: 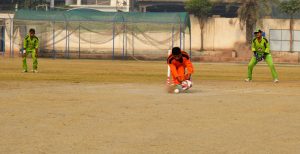