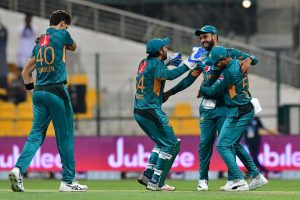 Mohammad Hafeez and Sarfraz Ahmed helped Pakistan in acheiving 148 runs in 20 overs. This was followed by some equally good bowling by Pakistan bowlers, especially Hasan Ali, whose 3 wickets for 35 runs helped Pakistan in winning yet another T20 match, and continue their dominance as the No.1 team in this format of the game.

Pakistan have done it, winning by two runs even after New Zealand were 79/1 chasing 149. That man Hasan Ali was key again, taking 3/35.
Overall it’s a great team work ??#PAKvNZL ↘ pic.twitter.com/6jStFGbfJF

A lucky win for pakistan and a terrible defeat for newzealand. After getting such a great start, with r.r under 7 runs, n.z batsman throwed the game. Pak batsman needs to get more runs on the board, cuz u can not always rely on the bowlers. They are humans too :). #PAKvNZ