These are the first eight matches of Champions League, Group stage Match Day 5 of 6. The highlights are appended below: 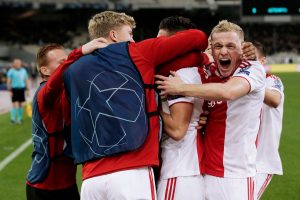 Disturbing scenes in Athens as an AEK fan throws a flare into the Ajax supporters pic.twitter.com/iavmmQjYcX

Wow. Dusan Tadic with another 2 goals as Ajax win 2-0 at AEK Athens to book their place in the last 16 of the #UCL. My, how #SaintsFC miss him this season. Great professional who is leading Ajax’s youngsters superbly. https://t.co/fYxUgfJnIR 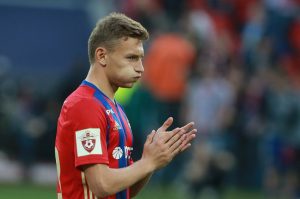 Because of Viktoria Plzen’s win over CSKA, both @ASRomaEN and @realmadriden have qualified for the knockout stages of the Champions League ?

They face off in about 10 minutes with the winner almost guaranteeing top spot ? pic.twitter.com/us4yOXXgdb 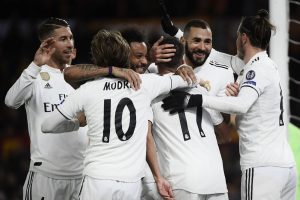 3 – Real Madrid attempted three shots against Roma, their lowest total in a first half of a game this season in all competitions. Relax. pic.twitter.com/fKteNjXsle

It’s been rough sailing, but Real Madrid steady the ship into the last 16 ? pic.twitter.com/fQfkjwXBqL

0 – Real Madrid have not won any of their last seven games with Raphaël Varane in all competitions, losing six of them (D1). Surprising. pic.twitter.com/3sud8d3l2G

Goals from Bale and Vazquez hand Real Madrid the win in Rome. A great second half performance sees Real Madrid through to the Champions League last 16 as group winners. Also nice to finally get a clean sheet. #RMUCL #HalaMadrid pic.twitter.com/rJ7sJEBnih

Roma without a doubt the best team in the first half, but Santiago Solaris boys played a really good second half that secured us the three points!#RomaMadrid pic.twitter.com/SmtGSb8pkJ

The draw is enough to see us through to the knock-out stage of the #UCL!

Maxwel Cornet = 1st player to score 3 goals against Manchester City in this competition since Lionel Messi in 2016/17. ⚽️⚽️⚽️#UCL pic.twitter.com/HkkT3bEkJv

3 – Maxwel Cornet is the first player to score at least 3 goals against Manchester City in a single Champions League season since Lionel Messi in 2016/17 (4 goals). Fever. pic.twitter.com/vU2cZLqkbw

Manchester City secured qualification to the Champions League last 16 with a game remaining following an entertaining 2-2 draw at Lyon.https://t.co/Z60yoZJGTM

Manchester City will play Leicester away in the Carabao Cup quarter-finals after they beat Southampton on penalties in their fourth round match tonight. pic.twitter.com/mHp4rCusL1

Manchester City have qualified for the last 16 of the Champions League with a game to spare, courtesy of a 2-2 draw with Lyon#MCFC #LYOMCI pic.twitter.com/CzM4tu0dFz

2 – Aymeric Laporte has scored 2 goals in the Champions League this season, more than any other central defender. Revolution. @ManCity pic.twitter.com/6kstnmALWZ

12 – @ManCity are the highest scorers so far in the 2018-19 Champions League, netting 12 goals in their four games. Devastating. #LYOMCI pic.twitter.com/oheO8BhZwm