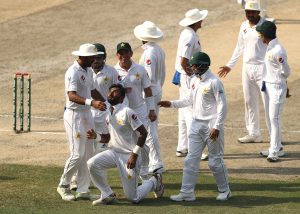 Pakistan are in total control of the principal Test in Dubai, with 7 wickets in hand and 325 runs in the lead. Earlier, Australia had experienced their worst collapse in UAE, as they were all out for 202 runs.

This collapse came after their two openers, Aaron Finch and Usman Khawaja struck fine fifties, and took Australia to 142 runs without a loss of a wicket. In any case, after both openers got out, the Kangaroos lost the remaining wickets at only 60 runs. Bilal Asif lead from the front, as he got six wickets to destroy the Aussies.

What a collapse! Australia go from 142/0 to 202 all out thanks to 6/36 from debutant Bilal Asif and 4/29 from Mohammad Abbas. They trail by 280 runs, Pakistan do not enforce the follow-on.#PAKvAUS LIVE ➡️ https://t.co/sRNIJtvl02 pic.twitter.com/5cu4Q3ETXM

Bed time for me in Australia… Bilal.. just superb. And I still think it’s a road… we just don’t have a licence to drive on them yet. Well played Pakistan. Micky would be happy. Night all!

Despite losing 3 quick wickets at the death, Pakistan lead the Aussies by 325! ?

#PAKvAUS Day 3: Pakistan get a firm grip ✊ on the 1st test

Spinners who have taken 5 wickets on Test debut for Pakistan: