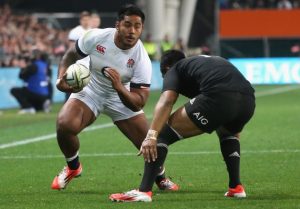 Manu Tuilagi is relied upon to make his hotly anticipated England return in their last pre-winter match against Australia on 24 November.

The Leicester centre was relied upon to play against South Africa in the primary match of the fall, yet he endured groin injury while training.

Saturday’s installation against 2019 World Cup has Japan will come too early, yet safeguard mentor John Mitchell says Tuilagi could confront the Wallabies.

Previous New Zealand mentor Mitchell trusts England are shutting the hole on the All Blacks in the wake of enduring a one-point thrashing to the title holders a weekend ago.

England defence coach John Mitchell on Manu Tuilagi: “Manu is progressing nicely. He’s at a stage where we want to be 100 per cent sure. We’ll make a decision once he’s at 100 per cent – but we’re working him towards the Australia game.” @SkySportsNews

Steve Hansen’s men upset a 15-point preferred standpoint to lead 16-15, preceding Sam Underhill’s late score was prohibited in light of a tight offside call against Courtney Lawes in the development to the attempt.

Yey ja ne these Autumn tests really tested our depth and I rate they are doing okay thus far. We missing so many players,namely ?