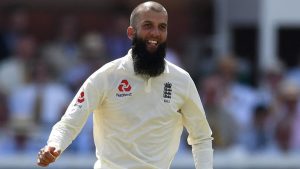 Despite suffering from a finger injury in the 3rd Test, England’s cricketer, Jonny Bairstow was passed fit and will now feature as a specialist batsman in the 4th Test against India.

The injury suffered by Bairstow came at Trent Bridge, when the wicket-keeper batsman was struck on the finger by one of Jimmy Anderson’s delivery at Trent Bridge. He was immediately supplanted behind the stumps by Jos Buttler, who will also keep the wicket in the 4th test.

Furthermore, Sam Curran is all set to replace the injured Chris Woakes, while all-rounder Moeen Ali is also included into the test side as a replacement, for the young batsman Ollie Pope.

At present England are 2-1 up in the series, which means that a win at Southampton will guarantee them a series win. This series could already have been wrapped up by England, if it was not for India’s 203-run win in Nottingham, where England lost every one of their first-innings wickets for 161 runs.

It has been 10 years since England lost consecutive home Tests, and maintenance of that run would guarantee that they should not lose the 4th test, thus expanding their vanquished record in home series to 9 wins in a row.

Meanwhile India, who are currently placed at the top of the Men’s Test team rankings, must maintain a strategic distance from defeat in the 4th test to keep the series alive, as a loss will decisively hand England a series win.

Here is the England squad announced for the 4th test:

Most cricket fans were satisfied with the inclusion of Moeen Ali and especially Sam Curran, whose exclusion in the 3rd test became a point of criticism for the English selectors.

It goes back too the seam attack being too similar with four right arm swing bowlers, Sam Curran gives batsman a completely new problem not just a variation, missed him in the third test.

The treatment of Sam Curran and Ollie Pope is sadly reminiscent of the way the England selectors treated hick and ramprakash.Same inconsistent selection policy – chopping and changing great for young players confidence ?#ENGvsIND

So why did Moeen Ali have to go back to his county to regain his England place, yet Alistair Cook keeps his place after a dismal record? @root66 @ECB_cricket #DoubleStandards

Very pleased with the team for the 4th test. Great to see Moeen Ali and Sam Curran back in. Bairstow should be our permanent number 4, with Buttler keeping and batting 6. Provided the openers score runs, I reckon this is the best team we can field. #ENGvIND