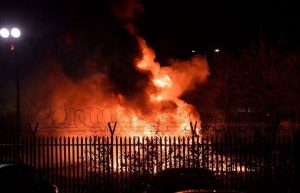 The Leicester City owner Vichai Srivaddhanaprabha’s helicopter has smashed in a car park outside the club’s ground not long after taking off after a match.

It is not known whether Vichai Srivaddhanaprabha was in the helicopter at the time.

Our thoughts and prayers are with all those involved.

Pictures show a vast fire in the car park, which has since been put out.

A representative for East Midlands Ambulance Service said they got a call at 20:38 BST to reports of the helicopter crash.

Spoken to King Power, who will release a statement tomorrow. #LCFC owner Vichai Srivaddhanaprabha was on-board the eight-seater helicopter to London. Failure, upon take off, resulted in a fire prior to a crash in the car park. No news on casualties. Prayers with #LCFC family

The administration has educated individuals regarding the general population to avoid the zone.

Under Mr Srivaddhanaprabha’s possession, Leicester City won the Premier League in 2016, having begun the season as 5,000/1 outcasts.