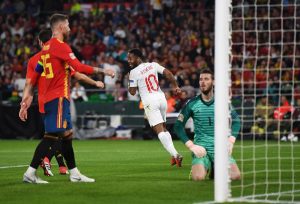 England have broken Spain’s unbeaten streak of 38 competitive home games without a loss, dating back over 15 years.

The youngest England side since 1959 have just beaten a Spain team who haven’t lost a competitive home game in 15 years..

The future is bright ??? pic.twitter.com/cMNw5q9sJH

A pulsating game goes the way of Gareth Southgate’s side thanks in part to Raheem Sterling’s double.
England’s first win in Spain since 1987.