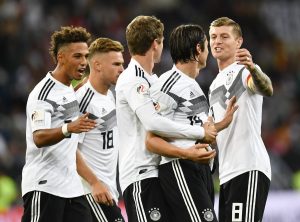 Germany has so much regressed… They are struggling to beat peru

Brandt, who scored their first goal, was extremely impressive, and could thrive if Löw is to trust the younger players rather than stick with the old guard.

Two quick goals within a few minutes at the Rhein-Neckar-Arena! Despite a dominant German start, Advincula made it 1-0 to Peru as he smashed the ball into the net after 22 minutes. Three minutes later, Julian Brandt equalised with a lofted finish. #GERPER #DieMannschaft

Germany defeated Perú in a friendly match and Ter Stegen who was the first option for Löw today, played the whole game. pic.twitter.com/pW8KLACr5a