Italian Serie A ’18-19 – Highlights: Cagliari Snatch A Draw From Roma

These are the next three matches of of Serie A, Match Day 15 of 38. The highlights are appended below the points table. 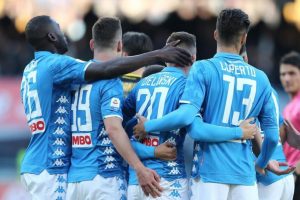 4-0 L,they are due a win havent won v mufc for like 3-4 seasons now in PL,if they go through v Napoli in midweek there confidence will be something else for rest of the ssn,everything going there way

Agreed. But the selection was the closest we’ve got to his Napoli side and the messaging was more important in a way. Tonight showed Sarri was willing to commit. That we can win with Jorginho leading this side. That Kante can adapt. A defeat tonight would have been disastrous.

Welcome back; Napoli needs you if we want to win something.
Believe in your self and you can do much more than what you did today. thank you @MrAncelotti for giving him a chance

First game in blue, what a relief! Thanks to all those people who helped me on my way back to the pitch! Alhamdulillah! ?? #debut #thankful #mashaAllah #NapoliFrosinone #ForzaNapoliSempre @sscnapoli pic.twitter.com/9x1Xgc79kB 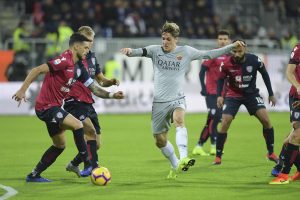 I swear i saw people calling a draw against Roma an improvement because we were getting beaten by them in the last few years ???

Roma just can’t defend at all can they…13! in box shots allowed in a 2-2 draw to Cagliari. They stood out as leakiest defense among big teams by a huge margin when I first dove into data and haven’t improved much pic.twitter.com/c9YMNRBwwn

Full Time: Roma is very Bad this season. Roma is the surprise of this season. Roma Subrised me a lot. After wining 2-0 they draw 2-2 and Calgiari played in 10 mans with a sent off. Impossible. pic.twitter.com/qyP6UHCqes