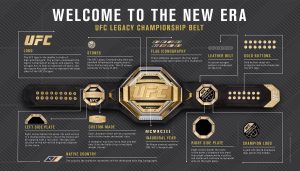 The UFC have evidently updated their title belts in time for UFC Fight Night 143 where the Flyweight title will be at stake in the headliner, between Henry Cejudo and Bantamweight Champion, TJ Dillashaw.

Famous MMA writer, Ariel Helwani has conveyed the news on his Twitter account, total with a photo of the new title belt.

The UFC has redesigned its championship belt. It will officially introduced tomorrow. Here’s what it looks like. pic.twitter.com/t1LYwms6XT

The UFC is alluding to the title as it’s “Heritage” belt and separates the subtleties of the plan without anyone else Twitter handle.

The new belt configuration has just created a lot of discussion on the web, not least because of its similitudes to the title belts of a specific other organization; to be specific WWE.

I know it’s become cliche to bash the UFC and Reebok for their aesthetic designs, and I like to be positive anyway, but we have to be real here:

This is literally by far the worst championship belt I’ve ever seen in a major MMA promotion. What on earth were they thinking here? pic.twitter.com/VTfxfVFJ9j

An incorporated organization logo embellishing the focal point of the title encompassed by gold trim with dark cowhide, the new UFC configuration is designed in the very same path as WWE’s best belt.

Is the new plan an update on the exemplary UFC Championship belt structures?

It is altogether extraordinary that is for sure and it will up to MMA fans worldwide to decide if the new structure will be acknowledged long haul as a trade for the past renditions of the UFC titles.

The new belt configuration will apparently make a big appearance at UFC Fight Night 143 which happens on January 19, 2019, where either ruling Flyweight Champion, Henry Cejudo or his challenger, Bantamweight Champion, TJ Dillashaw will wear the overhauled title out of the blue.