JAPAN: 2nd August – Thursday, will be the beginning of Softball’s road to the Tokyo 2020 Olympic Games, when officially the XVI WBSC Women’s Softball World Championship opens in Chiba, Japan.

The National Teams of 16 countries across six continents – Africa, Asia, Europe, North and South America and Oceania gathered at the official pre-event press conference on the eve of the opening ceremony.

The Opening Ceremony of the Women’s Softball World Championship 2018 will be held on Thursday at NASPA Stadium. After the ceremony, the Game 1 will be played between the National Teams of Japan and Italy.

All the teams will be active on 3rd August – Friday. 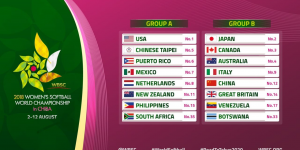 The premier global softball tournament in the world — the WBSC women’s softball flagship event — is the first of five qualifiers for the Olympic Games Tokyo 2020. The top finisher in Chiba, not including already qualified/host Japan, will be part of baseball and softball’s historic Olympic return at Tokyo 2020.