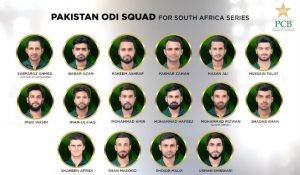 Mohammad Amir has been re-inserted to Pakistan’s one-day squad for the 5-match ODI series in South Africa.

The pacebowler has just highlighted in 10 ODIs since the ICC Champions Trophy final in June 2017, taking only three wickets at an average of 100.66.

In any case, Pakistan’s central selector Inzamam-ul-Haq clarified that Amir’s solid execution in the initial two Tests against South Africa, which the Proteas won to anchor a series  win in front of third and last match beginning on Friday, saw him acquire the gesture for the 50-over matches.

Asif Ali and Junaid Khan, who were a piece of the past ODI squad against New Zealand, pass up a great opportunity, with Inzamam expressing the previous is dropped because of “inconsistent and below-par performance” and the latter is not included because of fitness issues.

I quite like Pakistan’s ODI squad for SA with the exception of Imam ul Haq. I would rather would have had a player like Saud Shakeel who has scored tons of runs in domestic circuit, or even Asif Ali for that matter. Imam has looked out of sorts recently. #Cricket #PAKvSA