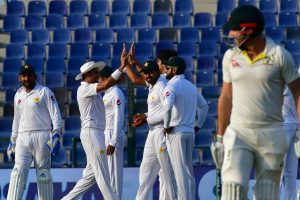 With a mammoth errand of pursuing 538 runs in the 4thinnings, Australia ended Day 3 at 47/1. Subsequent to losing Shaun Marsh early, Aaron Finch and Travis Head kept the Australian innings moving. Finch is as of now batting at 24, while his accomplice Travis is at 17.

Pakistan, prior in the day, decided to declare their innings at 400. Babar Azam got unlucky as he failed to score his first test hundred by only one run, while the Pakistan captain Sarfraz Ahmed additionally neglected to change over his well-incorporated 81-run innings with a three figure mark.

Pakistan primed for series victory after posting record run (538) chase. The current record stands at 418, set by the West Indies in 2003. Australia have 194 overs to overturn home side’s 538 lead #PAKvAUS

The second test against Australia at Abu Dhabi, saw Pakistan’s Azhar Ali dismissed in a bizarre manner. Assuming the ball had gone over the boundary, he went to chat with his partner Asad Shafiq, but the ball stopped short & was thrown to keeper Paine who knocked off the bails. pic.twitter.com/Dbw2IWCsdp

Pakistan need 9 more wickets to win the game and series 1-0. They had a 12-over burst at Australia after declaring their second innings at 400/9. #PakvsAus #2ndTest #AbuDhabi

Australian team definitely miss the presence of both David Warner and Steve Smith in the playing XI. Australia played really well to draw the first test against Pakistan but in this test, in… https://t.co/5RYHVfIiob

For more updates about Pakistan Vs Australia keep visiting allsportspk