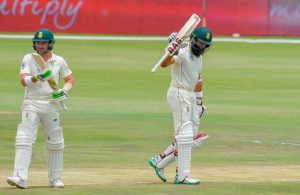 South Africa’s top order did not flinch against a strong Pakistan bowling attack, as fifties from Dean Elgar and Hashim Amla helped them win the match by 6 wickets. This win constitutes a 1-0 lead in the three match Test series.

Pakistan’s seamers tried their best to get back into the game, however 149 runs were not enough to defend against the likes of Elgar and Amla, as the latter remained unbeaten throughout his innings.

A friendly suggestion: Stop acting as if Pakistan lost a Test for the first time in South Africa since 1947.

Anyways, this Team has the ability to do wonders. All the best to Team Pakistan for next test. Pakistan Zindabad ??