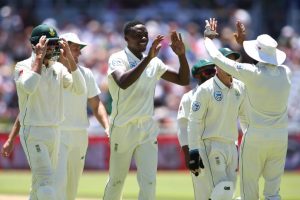 South Africa as of now have a 1-0 lead in the ongoing Test series and made goliath steps in endeavoring to make it 2-0 on the opening day of the second Test at Cape Town. At stumps, they stood only 54 runs behind Pakistan’s first innings aggregate of 177 with Aiden Markram scoring 78 runs to take the hosts along.

Hashim Amla stays unbeaten at the opposite end with Markram losing his wicket on the last wad of the day in awful conditions. The surface looks level as play has gone on and South Africa have not been irritated at all by the Pakistan assault.

Prior, in an all-inclusive second session, South Africa played out Pakistan for 177 after Faf du Plessis picked to bowl. Duanne Olivier by and by drove the pace assault with four wickets and others contributed as well.

Sarfraz Ahmed and Shan Masood gave some obstruction however once their wickets fell, rest remained a convention for the Proteas. Sarfraz scored 56 for Pakistan and Masood contributed with 44. Olivier’s four-fer was coordinated by Steyn’s three and two by Rabada.

47,56 and 51 overs of batting in the three innings of the series so far & Pak don’t even make an attempt to change the batting line up?? A team can only take so much of repeated batting failures-these spectacular collapses eventually take a toll & weaken the will to win or fight

Aiden Markram played superbly for his 78 but was bowled off the last delivery of the day to a ball that kept low from Shan Masood. #SAvPAK LIVE ➡️ https://t.co/sT3TAzx0C3 pic.twitter.com/etH8DzedGr