These are the first eight matches of the Premier League, Match Day 24 of 38. The match highlights and the top 10 teams points table is included.

Match 1 of 10: Wolves vs Leicester City 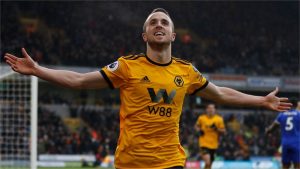 Diogo Jota is the first Wolves player ever to score a @PremierLeague hat-trick! #WOLLEI

Wolves have netted three 90* minute winners in the Premier League this season, more than any other side.

3 – @Wolves have scored more winning goals in the 90th minute or later than any other side in the @premierleague this season. Excitement. #WOLLEI

Wolves are a seriously good team with some top class players. Neves, Jota, Doherty and Jiminez to name just a few who may go on to play at a higher level. What a game! #WOLLEI #PremierLeague

Match 2 of 10: Liverpool vs Crystal Palace 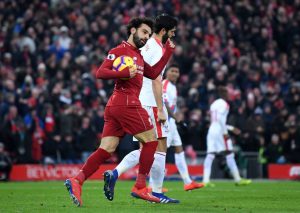 Your @carlsberg Man of the Match, Mo Salah! ? pic.twitter.com/wDXkCF42Eg

1000 – Roberto Firmino’s goal was Liverpool’s 1000th at Anfield in the Premier League, the third team to score that many at a specific venue in the competition (Man Utd at Old Trafford and Chelsea at Stamford Bridge). Millenary. pic.twitter.com/MHv0YzV6QQ

Salah says it means something to reach 50 Premier League goals, but says: “I’m looking forward more to getting to the 50 with Liverpool because I got two with Chelsea.” #LFC

2 – Both of James Milner’s Premier League red cards for Liverpool have been against Crystal Palace, and for fouls on Wilfried Zaha. Repetition. #LIVCRY

Lots of missed opportunities this afternoon, the best of which falling to Troy Deeney and Ashley Barnes in the first half. Both sides are now unbeaten in four Premier League games.

My report from Vicarage Road

Match 4 of 10: Newcastle vs Cardiff City

Fabian Schar scores twice and Ayoze Perez adds a third to lift @NUFC out of the bottom 3 and above their visitors #NEWCAR pic.twitter.com/qHjaDBuKzy

The bottom of the #PremierLeague tonight as it stands.

Newcastle’s win over Cardiff a massive 3 points for them. Their goal difference may be key when it comes to survival at the end of the season#NUFC #EPLrelegation pic.twitter.com/7DRCOSPkNz