These are the last two matches of the Premier League, Match Day 24 of 38. The match highlights and the top 10 teams points table is included.

Match 9 of 10: Huddersfield vs Manchester City 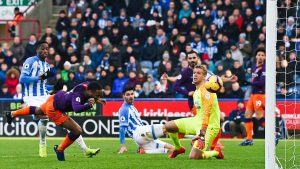 Caretaker Head Coach @M_Hudson5 has made six changes to the #htafc line-up for today’s @premierleague game against @ManCity.

Manchester City barely got out of second gear as they easily beat bottom club Huddersfield Town to close the gap on Premier League leaders Liverpool to four points on Sunday. https://t.co/MCMFHLXzYN pic.twitter.com/EvTgtMqeeY

8 – Since the start of last season, Leroy Sané has both scored and assisted in eight @premierleague games for Manchester City, at least three more times than any other player at the club (Sterling and Agüero 5). Spectrum. #HUDMCI pic.twitter.com/xdYnBcAwpQ

Pep Guardiola insists he does not care whether Manchester City play before or after Liverpool.

You know we just cant lose when I score a header ?? great job on a difficult pitch well done lads @mancity !!! pic.twitter.com/DzOIslbuXJ

Match 10 of 10: Fulham vs Tottenham Hotspur 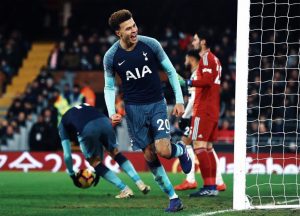 Since his debut in August 2015, Dele has been directly involved in 47% of Tottenham goals in the Premier League when Harry Kane has been absent. pic.twitter.com/vg6r8L2Zjj

Fernando Llorente has now scored as many Premier League goals for Fulham as he has for Tottenham (1)#FULTOT #COYS pic.twitter.com/3YlO6WwyOd

Tottenham midfielder Dele Alli gets the ball under control with his left foot as Fulham’s Denis Odoi tries to close him down
Fulham winger Andre Schurrle gets a shot off on goal as the Premier League strugglers look for an opening pic.twitter.com/I3J96r5tzS