This is the first match of the Premier League, Match Day 14 of 38. The highlights are appended below the points table.

Match 1 of 10: Cardiff City vs Wolves 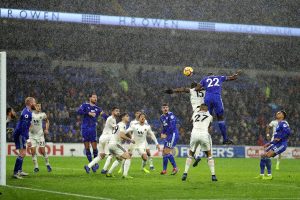 All of the talk was about Wolves and Fulham at the start of the season with the money they’ve spent. Who has beaten both fellow promoted teams at home in the Premier League this season? That’s right. CARDIFF CITY. #CityAsOne #Bluebirds

An early birthday present for Neil Warnock who turns 7️⃣0️⃣ tomorrow as his @CardiffCityFC side beat Wolves 2-1 ???

They have now won 3️⃣ games after conceding 1st – more than any other side in the @premierleague this season pic.twitter.com/g0QDen0PEr

Cardiff climb out of the relegation zone with a deserved 2-1 win over Wolves.

But … but … this wasn’t meant to be part of the script. Sky kept telling me Wolves are the ‘best ever’ promoted team in the Premier league era. Just the 61 points needed lads. You Reds #NFFC pic.twitter.com/J3gm8CrKcW

I wanted a win tonight to get us out of this dip. But I leave Cardiff with fans insisting ‘we’re relegated‘ & ‘Nuno has lost it’ – STOP IT! Time for fans to wake up & get out of Dreamland because this is the Premier League – it’s NOT an easy ride???‍♂️? #CARWOL #WWFC #wolves pic.twitter.com/rvbvuRAYbj

Joyous stuff. Fair play to the Seal on Franksy the other day, who when Franksy was saying “You’ve got to admit Wolves are doing really well”, said “They’re halfway down the Premier League, we’ve been there!”.