This is the next match of the Premier League, Match Day 16 of 38. The highlights are appended below the points table.

Match 9 of 10: Newcastle vs Wolves 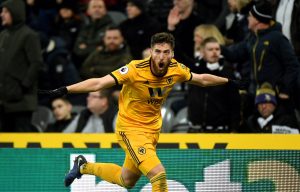 “We need VAR. Right now.” ⚫⚪@NUFC manager Rafa Benitez believes it is “so obvious” that the @premierleague needs VAR after today’s clash with @Wolves. ?

Should Newcastle United have had a penalty? pic.twitter.com/wQvyAsWDnI

Raúl Jiménez has directly contributed to eight of the 15 goals that Wolves have scored in the Premier League this season.

On the bench today. pic.twitter.com/EX4WO8g6Ob

Most take-ons completed per 90 minutes in the Premier League this season (min. five appearances):

Wolves have scored more than one goal in a Premier League away game for the first time this season.

The latest of late goals. pic.twitter.com/4o7YOarEVX

Matt Doherty headed home the winning goal in the fifth minute of injury time to give Wolves a 2-1 victory over 10-man Newcastle at St James’ Park. #NTVWeekendEdition @IdahWaringa pic.twitter.com/W5eA7Wnpv4

Fantasy Football managers everywhere scrambling to get him in their team before his price goes up… pic.twitter.com/MOJW6wBviQ

Dubravka then made a flying prevent from Doherty and another spare from Jimenez.