These are the last 3 matches of Premier League, Match Day 8 of 38. The highlights are appended below the points table. 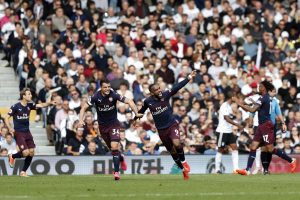 Arsenal make it six #PL wins in a row#FULARS pic.twitter.com/ok0Zl5aJXR

Arsenal have won nine consecutive matches in all competitions for the first time since April 2015 ?

The Gunners have won four of their last five away Premier League matches, as many as they’d won in their previous 19 on the road!

.@LTorreira34 made six interceptions vs. Fulham, the most by an @Arsenal player in a single Premier League game so far this season.

Lucas Torreira made six interceptions vs. Fulham, the most by an Arsenal player in a single Premier League game so far this season.

Size does not matter. ? pic.twitter.com/tUIGl4J2Vt

Anything you can do… pic.twitter.com/LUTPaSZwQv

Match 9 of 10: Southampton vs Chelsea 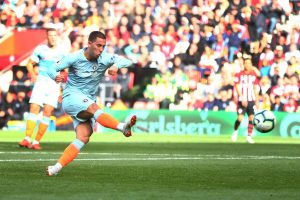 31 – There were 31 passes made in the build-up to Alvaro Morata’s goal for Chelsea against Southampton; the most of any goal in the Premier League this season. Slick. pic.twitter.com/1qWPuNkFJ3

1 – Ross Barkley is the first Englishman to both score and assist in a Premier League game for Chelsea since Frank Lampard in December 2013 vs Sunderland. Rise. pic.twitter.com/AGOrZgYAAb

One more and the record is broken… pic.twitter.com/lTnzUOPBWk

3 – With Chelsea, Liverpool and Manchester City all yet to suffer a league defeat this term, this is just the second time in Premier League history that as many as three teams have gone unbeaten in their opening eight games of a single season (also 2011-12). Race.

Match 10 of 10: Liverpool vs Manchester City 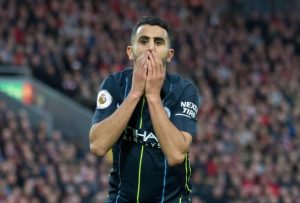 3 – No Premier League match this season has had fewer shots in the first half than Liverpool v Manchester City (3 – level with Newcastle v Arsenal & Huddersfield v Cardiff). Sparing. pic.twitter.com/8k35qg88Nf