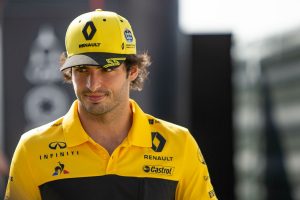 Days after the two time World champion, Fernando Alonso announced his retirement, Team McLaren signed Carlos Sainz as his replacement for the 2019 season.

Carlos Sainz joins McLaren in a multi-year deal starting from 2019 #F1 season – seemingly also ending his association with Red Bull. His teammate to be announced in due course of time: https://t.co/IUwWIWquhz @ZBrownCEO pic.twitter.com/w0eNRxpCFP

Carlos Sainz Vázquez de Castro, popularly known as Carlos Sainz Jr., is a Spanish national and a Formula One racing driver. Also, he is the son of the former double World Rally Champion Carlos Sainz.

Sainz is currently 23 years of age, and right now is on loan at Renault from Red Bull.

Regarding his decision of joining McLaren, Carlos Sainz termed it as his ‘childhood dream’ and also said:

I’ve been a McLaren fan for as long as I can remember,

It’s a great name in the sport with an incredible heritage, and the list of drivers that have raced for McLaren over the years are among the heroes of Formula 1.

Fernando is of course one of them, so it’s particularly special that I’ll be taking his seat as part of the next generation of Spanish racing drivers behind the wheel of a McLaren.

On the other hand, the chief executive of McLaren Racing, Zak Brown also termed Sainz as the perfect blend of youth and experience, and also termed him as the next generation of young talent.

Extremely happy and proud to announce that I will be joining the @McLarenF1 family next year. Dream come true to drive for such a legendary team! pic.twitter.com/7pjSTNt6UG

After the Hungarian Grand Prix, Carlos Sainz sits eleventh in the driver’s title standings with a total of thirty points, with his best race coming off in 2017, for Toro Rosso where he took the fourth position.

So Carlos Sainz confirmed at @mclarenF1. Zak Brown: “It’s no secret that Carlos is a huge admirer of Fernando’s, and it’s fitting that he will be stepping into his seat as a Spaniard with a legendary name in motorsport”

Such a shame Alonso couldn’t have a competitive car at McLaren, imo he’s still the most talented driver on the grid, such a shame it’s gone to waste.

Good luck to Sainz but think it’s a lackluster signing. How McLaren have fallen

It’s been a rumour rumbling around the F1 paddock for a while, but it has now been officially announced that Carlos Sainz will race for McLaren next season, replacing the outgoing Fernando Alonso.https://t.co/dB5NG3tRlu

Has Carlos sainz made a mistake joining Mclaren and the big question is can he help them improve in 2019? #f1 #carlossainz #McLaren #skysportsf1