These are the first 7 matches of the Premier League, Match Day 25 of 38. The match highlights and the top 10 teams points table is included.

Match 1 of 10: Tottenham vs Newcastle 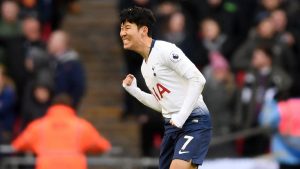 And @SpursOfficial despite key injuries and no transfers go to 2nd place in the Premier League.

Never. Give. Up. #COYS pic.twitter.com/x3qRZx4xvv

29 – Tottenham have gone 29 games without a draw in the Premier League, a new record, beating Bolton’s previous best of 28 set in 2011. Cabinet. pic.twitter.com/PpEmLQxNv4

Tottenham win a third Premier League game in a row and move up to second in the table ?#TOTNEW pic.twitter.com/flmsq2OQUi 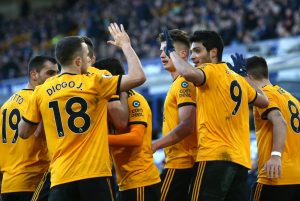 No pussyfooting around by #Wolves today as they beat #Everton 3-1 in the #PremierLeague but they were outshone by a little guy with plenty of cattitude!! (Via @jmp_uk) #WolverhamtonWanderers #WWFC #EFC #EPL #Cat #GoodisonCat #EvertonCat #EVEWOL pic.twitter.com/UrL8LgbgZH

The Premier League game between Everton and Wolverhampton Wanderers came to a brief halt Saturday when a black cat took the field around the 67-minute mark. It… pic.twitter.com/FhRhWDop0U

Match 3 of 10: Chelsea vs Huddersfield 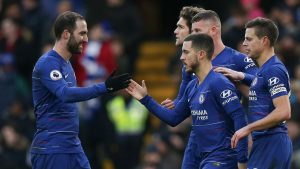 No Chelsea player has had more shots in a Premier League games this season. pic.twitter.com/HwrIbnUQCV

Gonzalo Higuain is the 1st @ChelseaFC player to score twice on their home #PL debut for the club since Mario Stanic v West Ham in August 2000 pic.twitter.com/qUSGRoF6we

Chelsea have scored 5 goals in a premier league game for the first time under Maurizio Sarri. Wait. #CFC

Match 4 of 10: Brighton vs Watford 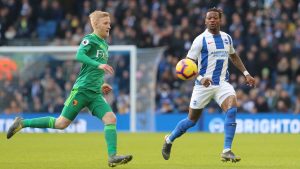 Were you at the Amex for Brighton’s Premier League match with Watford? Check out our selection of fan and action pictures #bhafc #bhawat https://t.co/tnzk0oOZbR pic.twitter.com/XO2JkQqCsq