Golf – Saudi International: Li Haotong Fights Back To Tie With Johnson At The Top 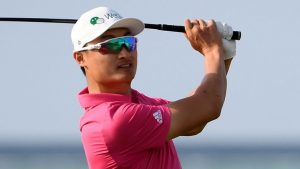 Li Haotong asserted an share of the lead at the Saudi International after he shot a dazzling four eagles in the third round to tie with Dustin Johnson on Saturday.

The Chinese star had just scored a eagle and a birdie when he twofold came up short the 6th, however his recuperation was surprising at the Royal Greens Golf and Country Club.

Li reacted with a second birdie and after that, on the back nine, hit a further three falcons, with three of his four going ahead standard four openings as he flooded into conflict.

Second-round pioneer Johnson had appeared to ease towards an European Tour triumph prior in the day after four successive birdies through the turn, however he neglected to increase another shot as Li energized.

Johnson, among four of the world’s main five in real life this week, had driven Li and Zander Lombard by three shots heading into the end of the week after a course record on Friday, yet a nearly humble five-under 65 saw that advantage cleared out.

Li has been pushed into the spotlight for the second week pursuing he was disputably given a two-shot punishment at the last opening at the Dubai Desert Classic.

The pair are on 16 under, with Tom Lewis’ 62 in third place sufficiently just to move inside five shots of the lead.

In the meantime, Min Woo Lee kept on exceeding expectations with a seven-under 63 to move to eight under and a tie for 6th in simply his second proficient beginning.

A sensational day saw a few major names struggle, none more so than Sergio Garcia, who was precluded for harming the greens.

Bryson DeChambeau, who won in Dubai a week ago, was back in joint-fifteenth after a 68 left him on six under.

Li Haotong eagled four holes to take a share of the lead in an eventful third round at the Saudi International tournament https://t.co/IKVwyJSYAf