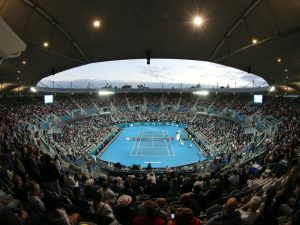 Ashleigh Barty has eyes for just a single prize in the wake of proceeding with her goliath killing run into her second-in a row Sydney International final.

Barty came back from a set down and withstood 15 aces on Friday from enormous hitting world No.9 Kiki Bertens to beat the Dutchwoman 6-7 (4-7) 6-4 7-5 of every a quality two-hour, 18-minute semi-final, setting up a date with Petra Kvitova in the decider.

In the wake of taking out 2017 French Open victor Jelena Ostapenko in the first round, Barty has since toppled world No.1 Simona Halep, the twelfth positioned Elise Mertens and Bertens to send an unfavorable cautioning to her Open adversaries.

Be that as it may, declining to move her center, the new brilliant young lady of tennis needs joining her object of worship Evonne Goolagong and a large group of different greats including Margaret Court, Chris Evert and Martina Navratilova on the Sydney respect move before stressing over the season’s first terrific pummel beginning on Monday in Melbourne.

The 22-year-old said it would be a fantasy to wind up the principal Australian victor in Sydney since Alicia Molik 14 years back.

Molik, who was courtside for Friday’s success at Ken Rosewall Arena, proceeded to achieve the Australian Open quarter-finals seven days after the fact.

Just Czech fifth seed Kvitova now remains in her way, after the world No.8 controlled through Belarusian Aliaksandra Sasnovich 6-1 6-2 on Friday night.

Petra #Kvitova has won both of her previous matches against Ashleigh #Barty– can the Czech make it a hat-trick of wins in the Sydney final on Saturday?

What a brilliant comeback win by Ashleigh Barty to reach the #SydneyTennis final defeating Kiki Bertens 6-7(4), 6-4, 7-5. Will meet Sasnovich or Kvitova in the final. #GoAussies