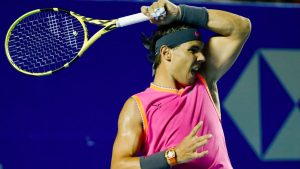 Previous world number one Rafael Nadal made a triumphant comeback to the ATP Tour with a triumph over Mischa Zverev at the Mexican Open.

Nadal was playing out of the blue since the Australian Open at Melbourne Park, where the 17-time grand slam champion was defeated by Novak Djokovic in the final.

There were indications of rust in Acapulco however Nadal – whose two Mexican Open titles came when the ATP 500 competition was held on clay – was amazingly brilliant for Zverev 6-3 6-3 on Tuesday.

Top seed Nadal progressed in 60 minutes, 21 minutes as he set up a mouth-watering final-16 conflict against Australian Nick Kyrgios.

Nadal demonstrated flashes of his brightness from the beginning, with the world number two ruling on the Mexican hard courts.

Harassing his German adversary with his incredible hitting, Nadal broke Zverev for a 3-1 lead and it was a favorable position he never surrendered.

Nadal battled off one break point in the opener as the Spaniard reeled off three progressive points from 15-30 to finish off the primary set with a forceful volley at the net.

He got the opportunity to begin the second set with a break however Zverev figured out how to deny the 32-year-old until Nadal got through in the seventh match, which demonstrated definitive.

.@RafaelNadal improves to 15-1 at the @AbiertoTelcel with a 6-3, 6-3 win over Mischa Zverev, setting up a R2 clash with Nick Kyrgios.

First match since Melbourne= SHARP ?@RafaelNadal speaks to @PrakashAmritraj after his 6-3, 6-3 victory over M. Zverev at @AbiertoTelcel.
Next up for Rafa? @NickKyrgios ?#AMT2019 pic.twitter.com/g3GoGMancI

He is still way off to his minimum best; first serve % is a concern. Needs a lot more to push off the threat from #Kyrgios; hopefully he took it light in the 1st round. #VamosRafa