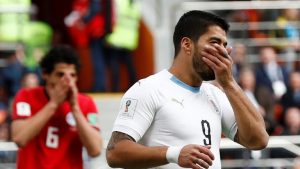 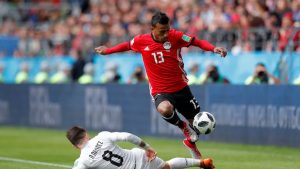 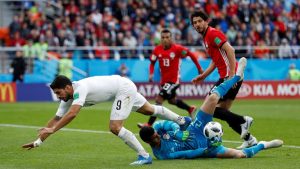 A dramatic win for Uruguay over Egypt!!! Jose Gimenez’s late winner is even better with Titanic music!!!

Egypt fought hard fought excellently. Hegazi , Elshanawy in the goal were like rock. But couldn’t held on in the dying moments of the match when Jose Maria Jiminez won it with a fine header for Uruguay.

?? First #WorldCup in 28 Years
? Evenly matched game
? Concede from a set-piece in the 89th minute

No Salah, No Party ? pic.twitter.com/jvIZHKIE5N

Sad for Egypt. They played a smart and spirited match, had it taken from them at the death. Hope we see Salah against Russia!

Uruguay did look sluggish (esp Suarez) but they aren’t trying to blow teams away. They are trying to win 1-0 or 2-0, which they did. Onward.

Rodrigo Bentancur became the player with the most touches (104) and most completed passes (81) of any Uruguay player at the World Cup since 1966.

Quite impressive for a 20-year-old making his World Cup debut. pic.twitter.com/y9TOLTgUj2

Uruguay saved their asses today because of a set piece. Scouse bastard Suarez is finished though.

Woke up early to watch Uruguay vs Egypt…that game was crying out for Mo Salah. Such a shame he didn’t play.

World Cup not over for Egypt, but path forward is hard.

Join allsportspk for the next match between Morocco and Iran.