Allsportspk presents to you the highlights of the semi finals of women’s singles of Wimbledon 2018.

The one thing Angelique Kerber’s resurgent 2018 season had been missing was a major final.

Massive validation of a career and the process of both rebuilding and sustaining excellence. #AccentSW19

The last time Serena Williams played the #Wimbledon final, Angelique Kerber was standing across the net. It was an incredibly high-quality match.

We’ll do it again on Saturday.

Will we see @AngeliqueKerber lift the trophy on Saturday? pic.twitter.com/bTwiRmcHyp 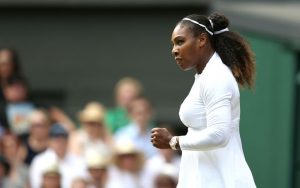 The lob ?
The speed ?
The backhand ?@serenawilliams stars in the @HSBC_Sport Play of the Day pic.twitter.com/jgoSAylJXf

A few months ago Serena Williams gave birth to a human (by caesarean) had 2 surgeries nearly dying, and she’s out there bossing the Wimbledon semi finals.
Compare that to some of the men in the World Cup who cry and whinge when someone steps on their toe.
Just saying..??‍♀️

Still unbeaten at #Wimbledon since 2014.@serenawilliams‘ victory over Julia Goerges extends her run of consecutive match wins at The Championships to 20, equalling her career-best streak set between 2002 and 2004 ? pic.twitter.com/XuXTALLm0F

Pakistan call off the tour of Bangladesh