WATCH: Luis Suarez scored the opener for Uruguay who went on to make it three wins out of three at the FIFA #WorldCup with a 3-0 victory over a 10-man Russia. 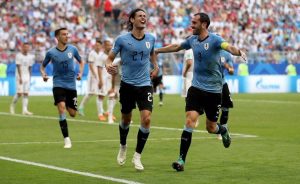 At long last Edison Cavani has a goal. The Striker netted the 3rd goal for the Sky blues of Uruguay.

With the Denis Cheryshev own goal, the 2018 #WorldCup has matched the 1998 World Cup for the most own goals in a single tournament with 6. pic.twitter.com/lc0mra4YWX

Only two players have scored for #URU in three different World Cup tournaments:

Another good day at the #WorldCup for @LuisSuarez9! 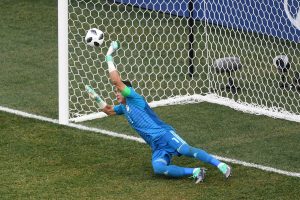 Club rivalries aside, it’s clear the World Cup was just too big a stage for Mo Salah. Some players revel in the biggest spotlight (Lingard, Rashford etc…..) but some shit their pants. And I’m afraid Mo needs new grundies…..

Sorry #salah the world of football still loves you. @MoSalah forever in our hearts. #lfc #WorldCup #KSAEGY
A good year for salah but worse in #WorldCup

“RT if you think Ramos is a monster and Salah deserved to go through” pic.twitter.com/WNiSC1oxRB

Salman Al-Faraj what great play mate. Seriously I would pmsl if this man was related to nasty Nigel, though I doubt Mr Al-Faraj would be too impressed with a family connection!

ALIREZA BEIRANVAND ? this guy was a homeless in Tehran, after escaping his nomad family, now stops a Ronaldo penalty. In the WORLD CUP! #IRN pic.twitter.com/Nt3jD3VO7U

Portugal qualified for the round of 16 at the #WorldCup despite being held 1-1 by #Iran in World Cup Group B pic.twitter.com/p8ox7823UC

❌ Missed a penalty, thanks to which Portugal will face Uruguay.

? Punched and Elbowed a player. Got a yellow but should’ve been a red.

For anyone saying Ronaldo “bottled it” tonight, just let it sink in that without his goals this Portugal side would have finished with 1 point. Instead, they’re through to the last 16. Anyone can miss a penalty, even the two best players in the world as this World Cup has shown.

I’ve been saying it for 14 years now, Ricardo Quaresma will be world-class one day.

Ricardo Quaresma has scored his first ever World Cup goal with his first shot on target in his first start at the tournament.

It just *had* to be a Trivela. ? pic.twitter.com/t7mkt5GQMK

Ricardo Quaresma. Old but Gold. The most skillful Portuguese player of our time. Complete package mehn

If ever a goal exemplified Ricardo Quaresma, it’s that one. A player who has always been inconsistent but who is always capable of a moment of brilliance. Absolutely magical goal. 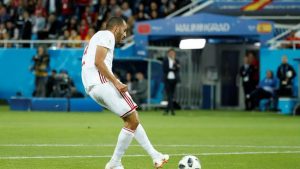 Goal Morocco! Spain are down! Oh boy! Spain would be out as it stands! Khalid Boutaib with Morocco’s first goal of the tournament after Spain give it away near the centre circle! #ESPMAR #WorldCup #Rusia2018 @cnewslive

Khalid Boutaib, scores Morocco’s first goal at a #WorldCup finals since Salaheddine Bassir sealed a 3-0 win against Scotland in 1998.

12 – Isco has been directly involved in 12 goals in his last 15 international appearances for Spain, scoring 10 goals and assisting a further two. Magician. #ESPMAR #ESP #WorldCup pic.twitter.com/DQyXheOrWk

Isco’s half by numbers vs. Morocco:

Spain can be as smug as they like at missing out on Uruguay. Just wait until they realise who controls room service in every single Moscow hotel ahead of that game against Russia.

2006 – Spain have finished a World Cup group stage unbeaten for the first time since 2006 (P3 W3), having lost at least once in each of the last two editions of the competition. Character. #ESPMAR #ESP #WorldCup pic.twitter.com/tJk0hFOspR