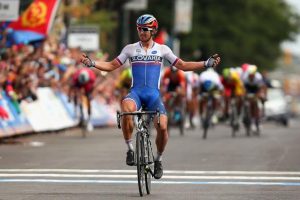 Sagan Peter retained his rank at the top of the table with Chris Froome and Elia Viviani placed at the 2nd and 3rd positions respectively. Thomas Geraint lost his position to Julian Alaphilippe who is now placed at the 4th place.

Some of the other significant upgrades were of Greg Van Avermaet, Tim Wellens and Primoz Roglic who are now placed at 5th, 8th and 11th position respectively.

Italy remains at the top of the table with Belgium placed in the 2nd place. Netherlands third place was taken by France and other significant upgrades were of Ireland and Portugal who are now placed at 15th and 21st positions respectively.

Quick – Step Floors retains its rank at the top of the table with Team Sky and Bora- Hansgrove placed at the 2nd and 3rd position respectively.