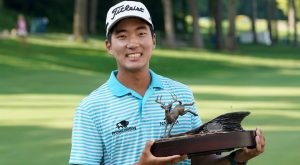 Dustin Johnson remained at the top position in the Men’s golf rankings followed by Justin Thomas and Justin Rose who are placed at 2nd and 3rd respectively.

Michael Kim won the John Deere classic and upgraded his rank from the 473rd position to the 215th position.

How about that swag from Michael Kim telling the crowd he can’t hear them after making a birdie to lead by EIGHT pic.twitter.com/Y1zdtZIIVw

Some of the other upgrades in Men’s golf rankings include, Alex Noren, Patrick Reed and Charley Hoffman hwo are now placed at 11th, 12th and 34th position respectively.

Sports Corruption – Tennis: Credibility In Doubt; What is the Solution?