These are the first 3 matches of of Serie A, Match Day 21 of 38. The highlights are appended below the points table.

#SassuoloCagliari Sassuolo no longer have Boateng so that leaves the #9 role up for grabs. Babacar is probably not trusted and Matri is no longer a Serie A standard striker. I would love Scamacca to have an instant breakthrough but it is probably wishful thinking. 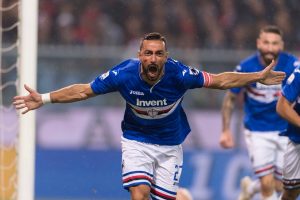 #Udinese have placed the team into a training retreat after the 4-0 humiliation by #Sampdoria . “We’ve also annulled the two days off.” https://t.co/9Ztk3TAtod #SampUdinese #SerieA pic.twitter.com/JRJILOVlB3

And with the double today, @FQuagliarella27 of @sampdoria wrote once again his name in the history of #SerieATIM! He scored in 11 consecutive league matches, equalling the record set in 1994 by Gabriel Omar Batistuta! ? pic.twitter.com/9oqwMkhWYN

Milan another match of their lives against us, an idiot as a referee, no penalty given, always a red at the end out of the blue, tomorrow Juve’s gonna win. Typical Serie A. #MilanNapoli

Great game coming up – 2nd place Napoli travel to San Siro and 4th place Milan for the biggest match in Serie A. Napoli is the away favorite. Can Gigio Donnarumma keep Milan in the game against Napoli’s menacing attack? https://t.co/qyBnb70iFQ #PlayersComeFirst #sportsbook #poker pic.twitter.com/DB4rPBHdoJ

A succesful change of coach in the summer and Milan are 2-3 years away from challenging for the Serie A title, such an interesting and great core of young players.