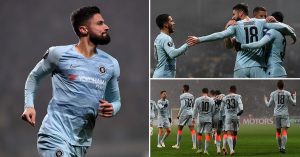 That’s 4/4 in the Europa League, and a place in the round of 32 secured. @_OlivierGiroud_’s header proving decisive in Belarus. ?

Sarri is happy Chelsea have qualified from the group, but says they need 3pts more to win it. He then corrects himself to say Chelsea need only one point to win the group.

.@ChelseaFC have now progressed from 15 of their 16 European (first) group stages. The only exception was the 2012/13 CL group phase, which led to their EL title.#EuropaLeague #BATEvCFC

If life/football was fair Chelsea would have lost the game 4 goals to 1.
Cahill just saved us in the last minute.
Through to the knockout stage of the @EuropaLeague
Onwards & Upwards ?#CFC

Only undefeated team in Europe’s top 5 leagues in all competitions. ? pic.twitter.com/yia0rCIW3i

+ Dull match but 3 points/qualification to the KO stage is what counts.
+ Good to see Hazard get more match fitness before Everton.
+ Chuffed for Giroud.
+ STILL undefeated in all comps.
– Cahill, Emerson & Zappacosta need to be sold.#BATEvCFC #Chelsea #UEL pic.twitter.com/1nQPo4aWmC

Maurizio Sarri says it was the result that pleased him because we did not play very well in the first half when we moved the ball too slowly. It was better early in the second half but we did not manage the last 15 minutes well. #BATEvCFC