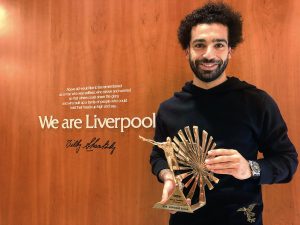 After a total of more than 650,000 votes, Egypt and Liverpool forward Mohamed Salah won the BBC African Footballer of the Year for the second time consecutively.

The Premier League’s player of the year scored 44 goals in 52 matches for Liverpool last season.

⚡⚽Here’s the interview you’ve all been waiting for! ⚡⚽@MimosaFawaz presents a very happy @MoSalah with his *second* #BBCAFOTY trophy! ?? pic.twitter.com/D2Pzyrda4f

And also motivating his club to the Champions League final , Salah scored twice for Egypt at the current year’s World Cup, having gotten the two goals in the match which took his nation to the competition out of the blue since 1990.

Salah turns into the principal player since Nigerian Jay-Jay Okocha to win this award in back to back years.

The previous Chelsea player marked for the Reds from Roma in the mid year of 2017. He scored 15 goals and made 11 others for the Italian side in 2016-17 as they completed second in Serie A, their best league placing for a long time.

In a remarkable beginning to his Liverpool professional career, Salah scored 19 goals in his initial 24 appearances. He proceeded to beat the past record of 31 goals in a 38-diversion Premier League season shared by Luis Suarez for the Reds in 2013-14, Cristiano Ronaldo for Manchester United in 2007-08 and Alan Shearer for Newcastle in 1995-96.

Mohamed Barakat (2005) and Mohamed Aboutrika (2008) are other Egyptians to have won the honor.