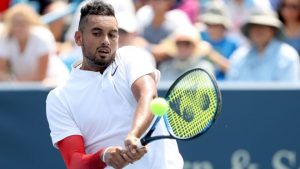 Regardless of being taken to the hospital on Christmas Day with a spider bite, Nick Kyrgios says he is prepared to guard his Brisbane International title.

The 23-year-old was put on anti-toxins in the wake of waking with a swollen foot, yet participated in a training session in Brisbane on Saturday.

American Ryan Harrison will face the Australian; The two previously met in the 2018 final and Krygios defeated Ryan in the 1st round on Monday.

As the world number 35 gets ready to return out of the blue since October, Kyrgios said he intends to decrease his 2019 calendar in the wake of battling with his psychological wellness last season.

He persevered through a disappointing 2018, dropping from 21 in the rankings previously being compelled to stop his season in view of common elbow damage.

Nick Kyrgios’ offseason: “I haven’t touched a racquet for a month. Tennis is the last thing I want to do [in off-season] – I am sick of it by then.”

Nick Kyrgios is set to fly into Queensland to prepare for his @BrisbaneTennis title defence after spending Christmas in hospital nursing a spider bite. https://t.co/L5G6gQX5lO

Nick Kyrgios says spider bite on foot has hampered his preparation for Aussie summer and expects to be “rusty” at Brisbane International title defence – “I wouldn’t be surprised if I made 30 unforced errors” – drawn Ryan Harrison in 1st rd, rematch of 2018 brissie final pic.twitter.com/01U4AuEmMQ

Formula 1: Fernando Alonso Diverts His Focus To The Final Leg...