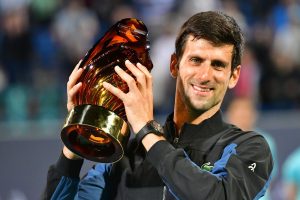 Novak Djokovic won the World Tennis Championship for a record-equalling 4th time in his vocation in the wake of doing combating over from a set down to vanquish Kevin Anderson.

The world number one – who had recently won the competition for three progressive years from 2011 to 2013 – triumphed 4-6 7-5 7-5 out of an exceptionally aggressive final in Abu Dhabi on Saturday.

Having beaten Roberto Bautista Agut a year prior to be delegated champion, Anderson showed up on course to hold his crown when he asserted the principal set.

The South African, positioned 6th on the planet in front of the new ATP Tour season, endured a scare in the 4th game before breaking his opponent in the ninth, enabling him to serve out for the opener.

Be that as it may, Djokovic hit back to ensure he would join Rafael Nadal – who had pulled back from his third-put play-off against Karen Khachanov after his misfortune to the enormous serving Anderson in the semi-finals on Friday – with a group of four of titles in the tournament’s history.

Djokovic was quiet before jumping late in the second set, asserting the significant break in the twelfth amusement, yet was then uniquely inefficient in a strained decider, with four match-point openings going begging.

Inevitably, however, the 31-year-old anchored a hard-battled triumph at the fifth endeavor, resoundingly finishing a convincing rally with a check court champ off his forehand side.

With Nadal out, Khachanov rather confronted Dominic Thiem in a display challenge, crushing the Austrian in a super sudden death round 10-3 after they had won a set each.

What is @DjokerNole‘s greatest challenge?

“Myself. It’s always been like that. We are the greatest allies and enemies of ourselves. So it just depends which wolf you feed.”#MWTC pic.twitter.com/A4FpLlVHb6