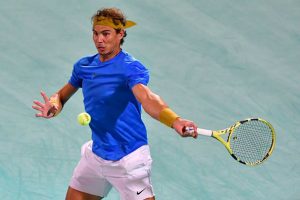 On his return to action, Rafael Nadal was beaten by Kevin Anderson at the World Tennis Championship, where the in-form Novak Djokovic achieved the final.

The Spaniard persevered through an intense 2018 season with injuries, finishing only one hard-court competition and most as of late missing the year-end ATP Finals with a stomach complaint.

Moreover, playing on Friday out of the blue since his semi-final retirement at the US Open in September, Nadal endured a 4 6-3 6-4 last-four misfortune to the defending champion Anderson at the Abu Dhabi tournament.

The 17-time Grand Slam champion poked in front halfway through the principal set and, in spite of the fact that Anderson quickly reacted, another break and a hold anchored the opener.

Be that as it may, Anderson shook off Nadal in the second to level the match and after that stayed patient under strain, the South African breaking to lead 5-4 preceding finishing off triumph.

World number one Djokovic anticipates Anderson in the last in the wake of hustling to a 6-4 6-2 prevail upon Karen Khachanov.

The Serbian made a quick beginning and wrapped up the main set notwithstanding in this manner abating, at that point discovered his groove again in the second to break twice and complete with a twist.

Rafael Nadal on why he won’t play tomorrow’s match: “I spent more time on court than what I thought. It’s not the moment for me to make a step back, it’s the moment to make a step forward… I suffered a lot in terms of injury. I don’t want to suffer more”https://t.co/qCf7xQgTYa

.@kandersonatp powers through an action-packed game against @rafaelnadal (4-6, 6-3, 6-4) this evening. Watch the defending champion in the GRANDE finale tomorrow at 7pm, tickets here – https://t.co/AaDLqtLe3b #AywaAnderson pic.twitter.com/XncG7TYThp