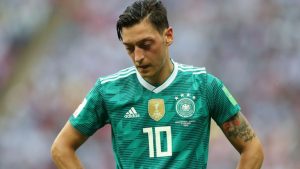 Mesut Ozil shocked the world after the German mid-fielder announced his immediate retirement from international football. The Arsenal player claimed that ‘racism and disrespect’ were the two main reasons behind this major decision.

Football fans were astonished by this revelation and expressed their views on social media. Have a look:

Here is the statement in full. Mesut Ozil has been massively disrespected & used by certain people for political gain. It’s disgraceful.

“I am German when we win, but I am an immigrant when we lose.” pic.twitter.com/Cg9wWkSMIJ

“I am German when we win, but I am an immigrant when we lose. Racism should never, ever be accepted.” – Mesut Ozil.

Nothing more to say. ?? pic.twitter.com/FDtPyIvPMg

Love Mesut Ozil even more after his statements today. Absolutely gutted he won’t wear the German shirt again but completely understand his stance. He’s been hung out to dry over a photo. Ridiculous, racist and disrespectful to the extreme. You have my full support @MesutOzil1088

“My friends Lukas Podolski and Miroslav Klose are never referred to as German-Polish so why am I German-Turkish? Is it because it’s Turkey? Is it because I’m a Muslim?” – Mesut #Ozil

Shame on you Germans pic.twitter.com/N8N5MwSxjf

Mesut Ozil, World Cup winner and one of the gifted players of his generation, quits international football after being hounded by German racists for months over his Turkish ancestry. https://t.co/gG1jMSX87v

“My friends Lukas Podolski and Miroslav Klose are never referred to as German-Polish, so why am I German-Turkish? Is it because it is Turkey? Is it because I’m a Muslim? I think here lays an important issue.” #afc pic.twitter.com/6AacirfTno

“I am a German when we win, but an immigrant when we lose.” – Mesut Ozil.

Racism should have no place in football

One of the worst days in football. I just can’t think of what @MesutOzil1088 would have gone through. Racism in football should not be tolerated. No matter what you are my idol and I’m even more prouder, after today, to say that. #StandWithOzil #SayNoToRacism #M1Ö #MesutOzil pic.twitter.com/V4uJdu7S7g

Mesut Ozil made all of these racist bigots fall today. My hero. #StandWithOzil pic.twitter.com/Z5YYLWRNeS

For more updates on this story keep visiting allsportspk

Football – Real Madrid: Why It Is Too Soon To Celebrate Madrid’s...