Cricket Australia: Smith, Warner & Bancroft Ban Will Not Be Reduced 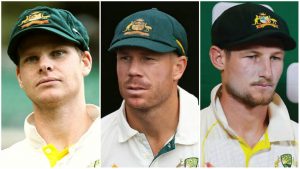 Cricket Australia has stated that the ongoing bans on the former Australian captain, Steve Smith, former vice-captain David Warner and opener Cameron Bancroft would not be lessened.

Smith and Warner were suspended for a year and Bancroft for 9 months after they were found to be involved in a ball-tampering activitiy in March, during the South Africa series.

The Australian Cricketers’ Association (ACA) needed the discipline lifted after an autonomous audit into CA observed it to be somewhat to fault.

Smith, skipper at the time, and Warner, are eight months into one-year bans, while Bancroft, who completed the swindling in South Africa, will be qualified to return in December.

Australia have battled since the trio were restricted. They lost a one-day series in England 5-0, a two-coordinate Test series against Pakistan 1-0 and were beaten 3-0 by similar adversaries in a T20 challenge.

They have likewise lost a one-day arrangement against South Africa 2-1 and host India over all configurations of the game this winter on home soil, beginning with a Twenty20 match in Brisbane on Wednesday.

So CA refused to reduce the ban on Smith n Warner.Firstly 12 month van was too harsh,and if that was going to be reduced,what had Bancroft done extra who has served his full ban.Tough decision it was for CA regarding current performance,but they shd be applaud as well. #AUSvIND pic.twitter.com/aYePaR8Pfg

NEWS:
No changes in the nature and length of the sanctions on the Cameron Bancroft, Steve Smith and David Warner. Cricket Australia confirm the suspended trio will have to serve the original ban imposed on them. pic.twitter.com/TUpnXZ9P0B

1 must acknowledge efforts & discipline showed by @cricketcomau , not to lift ban against Smith & Warner despite being on the floor in 2018.
I bet @BCCI can’t do same if Sharma & Kohli does d same.
Msg was clear no player is bigger than Team & Respective board. ? #AUSvIND