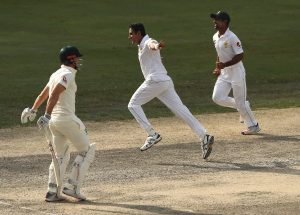 Pakistan seamer Mohammad Abbas asserted three fast wickets as Australia stumbled to 136-3, pursuing a mammoth total of 462 in the 1st test of this series in Dubai. Australian openers Usman Khawaja and Aaron Finch got where they cleared out off after their 142-run stand in the principal innings, including 72 runs by tea day four.

However, Pakistan’s Mohammad Abbas shone through for Pakistan once again as he took three wickets to Aaron Finch, Shaun Marsh and Mitchell Marsh to put Pakistan ahead.

Khawaja and Travis Head shared a solid partnership of 49 runs, and will hope to continue their innings if they want to acheive a far-fetched draw on day 5.

This Lad Mohammad Abbas has something special to deliver for Pakistan. Extremely tremendous game show both on flat and dead tracks. Superb bowling? waiting for the final day to watch him taking the honour of fastest Pak bowler to take 50 wkts. #PAKvAUS #Australia #AUSvsPAK #IMF pic.twitter.com/Etybdw2T5d

Australia’s average opening stand in Tests in the last two years is 48.60 which is highest for any team. Next best is Pakistan (40.44). #PakvAus

“There’s a lot of hard work to be done but I think we’re standing in a very good position right now.”@AzharAli_ and Pakistan aren’t taking the effort needed to claim the remaining seven wickets on day five for granted.

Selectors have finalized Pakistan squad for T20 series against Australia.

M.Amir will be dropped as he’s recommended to play FirstClass back home. M.Hafeez will be retained. Haris Sohail will be dropped too. Fast-Bowler Waqas Maqsood will replace Amir in th squad.??? #PAKvAUS

Pakistan Vs Australia: Pakistan’s victory against Australia in the Test match, Australia 136/3 https://t.co/DIzcMD1qzL