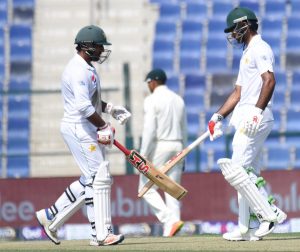 Pakistan recouped from 57-5 to post 282 and take two well-earned Australian wickets on a convincing first day of the 2nd test, being played in Abu Dhabi. Nathan Lyon claimed 4 wickets in 6 balls to trouble Pakistan early in the day, however the debutant Fakhar Zaman and the Pakistan captain, Sarfraz Ahmed led from the front, with indistinguishable scores of 94 runs each before both were dismissed without scoring a century, by Australia’s part-time legspinner Marnus Labuschagne.

After 8 Inngs Sarfraz Ahmed scored a Fifty in Test matches,it was the 2nd time that he was dismissed in nervous Nineties,before that he was out for 96 vs SL in Galle in 2015. Infact Sarfraz has score two of his three test centuries in UAE.

Acc to #MickeyArthur, onfield Umpires have been notified regarding Sarfraz Ahmed injury

M.Rizwan will do WicketKeeping in match until Sarfraz doesn’t gets fully fit. Rizwan will travel from Dubai to AbuDhabi tonight. Hopefully T.Paine & Match Referee will also permit.? #PAKvAUS

“I felt alot of pressure for being out of form. Player is criticized when not performing but I was criticized from all four sides. Some said I should be dropped from team & few suggested to leave captaincy. Hwvr this pressure lead me to play Inns of 94.”? #PAKvAUS

For more updates about Pakistan Vs Australia keep visiting allsportspk