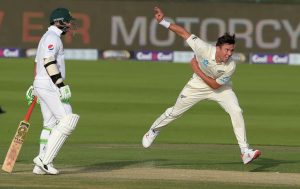 New Zealand recuperated as the guests finished the second day on 56 for the loss of one wicket, despite losing the primary wicket right off the bat in the second innings.

At present, the Kiwis are trailing by only 18 runs. On Day 2, play came to an end, after umpires chose to end the activity ahead of schedule because of awful lights.

Boult’s 4-54 derailed the Pakistani side who were bowled out for 227 against New Zealand’s first innings total of 153. pic.twitter.com/Z8uNw7kNQC

Pakistan have to restrict New Zealand under 300, otherwise this will be difficult contest for Pakistan to come back. Lets don’t forget Pakistan’s 4th innings batting record.#PAKvNZ#pakvsnz

New Zealand wrestled their way back into their Test against Pakistan earlier today!

Trent Boult took four wickets before Kane Williamson and Jeet Raval gritted it out until the close of play with the bat.

As many as nine wickets fell on the second day as Pakistan were bowled out for 227 before New Zealand ate into the deficit, just 18 behind at stumps