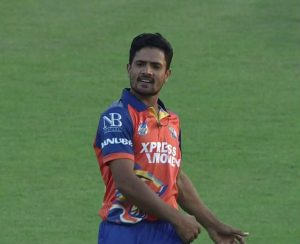 Pakistan pacer Aamer Yamin made history in the progressing 2018 T10 League as he grabbed four wickets in the same number of balls in Bengal Tigers’ 36-run prevail upon Northern Warriors.

Pursuing 131 runs to win, Northern Warriors got off to an extraordinary beginning as Lendl Simmons and Dwayne Smith scored 33 out of four overs previously Sunil Narine maneuvered Tigers once more into the assault by taking two wickets in two balls including the vital one of Andre Russell for a first-ball duck. Nicholas Pooran endeavored to score some fast runs before being dismissed to Ali Khan for 14.

Simmons, who was keeping his group in the chase, was rejected by Yamin for a well-made 44. That is the point at which the conduits opened for Tigers as Yamin expelled Rovman Powell, Ravi Bopara and Hardus Viljoen to end with four wickets off four balls.

By at that point, the match was everything except over for Warriors as they figured out how to score only 94 runs in 10 overs. Aamer Yamin finished with figures of 2-1-4-4, numbers that are viewed as too useful for T20s, forget T10s.

This T10 League is quite incredible. Shahzad flayed 74 off 16 yesterday, now Aamer Yamin has taken four wickets in four balls.