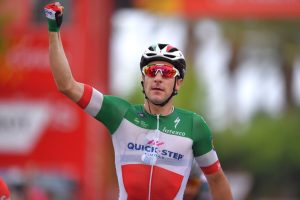 Elia Viviani won stage 10 of the Vuelta a España in the wake of conveying a determined run in Bermillo de Sayago. The Italian victor beat Peter Sagan into second place while Giacomo Nizzolo came third.

Simon Yates completed securely in the primary peloton to hold the red jersey. The Briton stays one moment clear of Alejandro Valverde on the general standings.

The stage was energized by a two-man move highlighting Tiago Machado and Jesus Ezquerra, however the escapees were cleared up by the peloton on the day’s solitary move with 30km remaining.

There was a spate of punctures in the end kilometres, with Yates, Nairo Quintana, Thibaut Pinot and Wilco Kelderman among those to endure punctured tires, however every one of the four hooked back onto the peloton.

Speedy Step Floors took control of the peloton on the run-in to the finishing kilometers, with Michael Mørkøv and Fabio Sabatini conveying a flawless lead-out for Viviani, who guaranteed his second stage win of this Vuelta.

Perfection by @MichaelMorkov and @SabatiniFabio to set up @EliaViviani today. Impeccable teamwork. Viviani only had to open with 150 meters to go. Class. #LaVuelta18