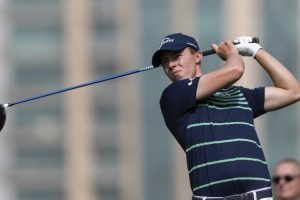 Matt Fitzpatrick leads by a solitary shot from eight players in a blocked leaderboard after an aggressive opening round of the Dubai Desert Classic.

The Englishman checked eight birdies and a singular bogey to sign for a seven-under-standard 65 out of a fine beginning at the Emirates Golf Club on Thursday.

Sergio Garcia and Bryson DeChambeau are among those in the blend in joint second, yet their promising start implied they were compelled to watch on as various players made a tilt for the lead.

It was Fitzpatrick who completed with a twist of four straight birdies to record his least first-round exertion since winning the 2015 British Masters.

Defending champion Li Haotong and Ian Poulter are among nine players a shot further back, while Tommy Fleetwood is in the midst of a bunch of players on four under.

Matt Fitzpatrick the clubhouse leader in Dubai after round 1. Now for Tony Finau to keep the dreams of a 493/1 double alive.